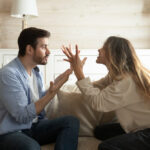 Anger & The Underlying Sadness: How To Stop Them From Affecting Your Relationships

We all seek love and harmony in our relationships. By many accounts, we often hear that anger doesn’t have a place in a happy, balanced relationship. This is quite a bit off the mark, as anger is an inevitable part of life, particularly when two individuals live together, seeing each other every single day.

Contrary to a common misconception, anger is not necessarily a negative emotion. In fact, feeling angry is a natural reaction to perceived unfairness, an insult, frustration, and aggression. Unfortunately, anger has been linked with aggression, and that is why so many people perceive it as a necessarily negative thing.

Still, regardless of the nature of anger, the problem arises when we are unable to understand and deal with our anger and stop it from affecting your relationships. In such cases, speaking with a relationship coach can be of immense benefit in helping you integrate unpleasant emotions and minimize anger outbursts.

Keep reading to learn more about anger and what you can do to release it in a healthy way.

Why Am I So Angry In Relationships?

There’s a myriad of possible reasons why you might feel angry in your relationship. For one, you may think that your partner criticizes you too much, or they may be overly jealous and insecure. Or you may have your own bottled up emotions that might bubble up to the surface in the form of anger outbursts. It is also possible that you and your partner may be stuck in an anger cycle, where your own anger and destructive behavior drive your partner’s daily anger and frustration, and vice versa.

How Does Anger Affect Your Relationships?

Uncontrolled and untreated anger can have a largely negative impact on your personal relationships. Here are some ways in which unmanaged anger can put a strain on your relationship:

If you constantly lash out at your partner in anger, it is entirely likely that they will start to fear your reactions. Instead of being able to confide in you and calmly discuss problems, they may start to avoid conflicts altogether for fear of causing an angry outburst.

Anger can also lead you to jump to conclusions, cast blame, or even insult your partner. Even if your partner is well aware that you don’t mean everything you say when you’re angry, they’ll most likely feel tense around you and feel frustrated with your short temper.

Instead of lashing out, you may have a tendency to bottle your anger up, which is no less damaging to your relationship. This causes feelings of bitterness and resentment both for you and your partner, as you may simmer with anger but avoid conflicts, deepening the distance between the two of you.

What Are The Three Types Of Anger?

Not everybody expresses anger in the same way. Understanding the different kinds of anger can help you understand your own and possibly find ways to healthily resolve it. Three common types of anger are:

Many people don’t like admitting that they feel angry as it makes them feel weak or they simply wish to avoid confrontation. Instead of showing your anger openly, you may sulk, go silent, or pretend that everything is fine when it’s not. Passive-aggressive anger can simmer beneath the surface, popping out in small bouts of annoyance, bitterness, and even manipulation.

Unlike passive-aggressive anger, hostile or openly aggressive anger means being verbally or physically aggressive when expressing anger and rage. This type of anger often manifests itself though fighting, sarcasm, criticism, shouting, and physical aggression.

The third type of anger is basically a balance between the two. While you shouldn’t avoid conflicts altogether and bottle up your anger, aggressiveness is rarely a good solution either. But expressing anger can also be healthy – if you feel angry but are able to remain calm and clearly and confidently express why you feel that way, you have probably mastered the art of assertive anger. This form of anger also entails patience, a willingness to listen to the other side, not resorting to casting blame, and not raising your voice.

Is Anger A Form Of Sadness?

While anger is definitely intense and fiery, it is actually a secondary emotion. This means that a primary emotion, such as sadness or fear, can usually be found behind the expressed anger.

Since most of us aren’t comfortable with sadness and fear, as it makes us feel out of control and vulnerable, we have to find a suitable coping mechanism. Anger is a particularly effective way of coping with these primary feelings as it helps us create a semblance of control and give us an energy boost. Essentially, anger is a tool for creating a feeling of power and control when we feel particularly vulnerable.

How Do You Release Anger And Sadness?

There are healthy ways to release your anger and the sadness or fear that underpin it. Try:

Visit A Relationship Coaching Retreat For Individuals & Integrate Your Anger

Are you ready to let your guard down and embrace the sadness and fear that underpin your anger? At PIVOT, we offer professional and compassionate assistance to individuals and couples in the forms of a wide range of transformative relationship workshops and coaching sessions. Contact us today and start your journey to a more balanced emotional life.